What’s “Working” in Your Business May Be Hurting You.

Usain Bolt is widely regarded as the world’s fastest man — he’s the world record holder in both the 100 meter and 200 meter dash and other events. In the 2008 Olympics in Beijing he also set a world record in his other event, the 4×100 meter relay, during the Games.  And he did so with flair.  As Wikipedia notes his record was not only set without a favorable wind, but he also visibly slowed down to celebrate before he finished and his shoelace was untied. Bolt won, and it wasn’t close.

What was the secret of his success?

According to Time Magazine, Bolt’s 2008 Olmypics diet was, by and large, Chicken McNuggets. 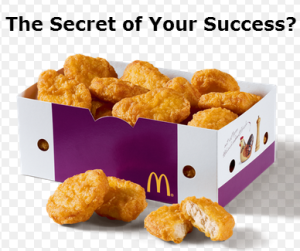 In the ten days Bolt spent in Beijing, he downed approximately 1,000 nuggets, averaging 100 a day.   “At first, I ate a box of 20 for lunch, then another for dinner,” Usain writes in his autobiography. “The next day I had two boxes for breakfast, one for lunch and then another couple in the evening. I even grabbed some fries and an apple pie to go with it.” The end result?  Three gold medals, all with world records attached.

The Things “Driving Your Success” May Not be What They Seem.

As an ambitious Olympian whose entire focus was winning gold, Bolt must have believed that the McNugget diet would help him win. And win he did.  But did McNuggets actually help?  We’re all results oriented people. But there can be dangers in focusing on “the win” without closely examining what really drives it.  There can be correlation without causation–  just because things two things happen at the same time does not mean that one caused the other. Not knowing the real drivers of your success makes it hard to repeat that success, or change course when situations require.  We advise clients to quantify business drivers with real granularity.  Often the data is not easily available and lives in different silos, e.g. CRM systems, financial systems, email systems.  Unifying sales and marketing data is a challenge but something we take on since you can’t act on data if your data is not in shape to be analyzed.  Understanding the reasons for success often requires a deeper dive.

How Sustainable is Your Success?

It’s wonderful to celebrate successes. It motivates the team, builds momentum and unifies people around common goals.  However, as leaders we need to carefully define what success really means, particularly in the context of where the company and market is headed. Things that seem to be working that can actually pose a future risk, because what works today may not work tomorrow.  Here are some examples:

Self Imposed Change is a Sign of True Champions

True success is repeatable and scalable well beyond the short term win. But building a repeatable system of success often requires adapting and changing.   After the Games, Bolt hired a well-known dietician.  He ultimately realized that his horrible eating habits had to change. Like great champions, winning companies impose change on themselves.  Last week I had the pleasure of meeting Bob Nardelli, the former CEO of Home Depot and Chrysler, at a conference where he spoke.  As Bob said, “Leaders must be able to reinvent themselves before they can reinvent their companies. You either innovate or you evaporate.”

Andy Grove, the former CEO of Intel, used to stress the importance of having a healthy paranoia in business. How well do you know the disruptors nipping at the heels of your company?  You can see their success but can you and should you emulate it?  There are no plug and play strategies—the successful practices of your competitors may not work for your company.  Honest looks in the mirror and reality checks on your company’s capabilities can help avoid false starts and inform strategies around building vs. buying vs. partnering to fill big gaps.  Because the success you see on the outside may not so doable when you look deeply inside.

I hate to end this article on such an abrupt note, but I have to run and get some Chicken McNuggets…or should I?

Let’s be in touch.  Drop us a line at

Read our other recent article:  Build an Ecosystem Around Your Company: The Google Way